We follow the national curriculum and have invested in two schemes: ‘Read to Write’ for English lessons and ‘Steps to Read’ for Reading lessons. The schemes pair with each other and also link to our wider non-core curriculum. This provides enhanced opportunities for pupils to gain subject knowledge and embed skills across the curriculum as learning is revisited. Our curriculum is ambitious; our high ceiling and expectations enable all pupils including those with SEN and those who are disadvantaged to achieve. Our English curriculum prepares pupils to communicate effectively and confidently with others, using the spoken and written word.

At Townfield, the development of vocabulary is at the heart of both English and the non-core curriculum area and we exploit opportunities to make links and create a vocabulary rich environment. Spelling, grammar and punctuation are taught systematically and opportunities to apply these skills in a progressive and contextual way are deliberately planned for. We want all children to be independent, fluent and reflective readers. From their starting points, pupils are taught how to read using a systematic phonics programme. Running alongside this and beyond, we teach reading through ‘whole class shared reading’. We explicitly model and teach reading comprehension skills to ensure pupils are able to access and engage with text. We aim to promote a life-long love of reading which develops their cultural, emotional and intellectual awareness. Our core values; resilience, respect and responsibility are continually developed through all English learning.

Here is a selection of our learning in English from this term:

In writing the children in Nursery are learning to mark make and give meanings to what they are drawing and writing. They have been learning how to form circles and vertical lines using their scrimbling sessions.

Reception- Room on the Broom

The children have been creating rhyming pairs and writing a magic potion. 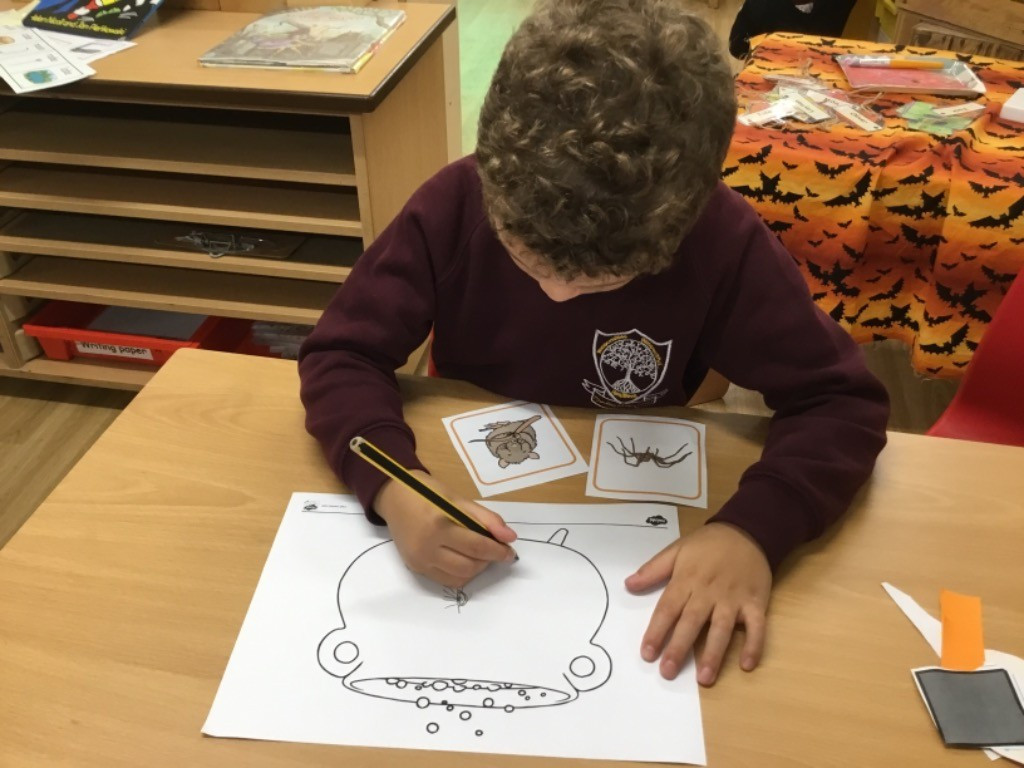 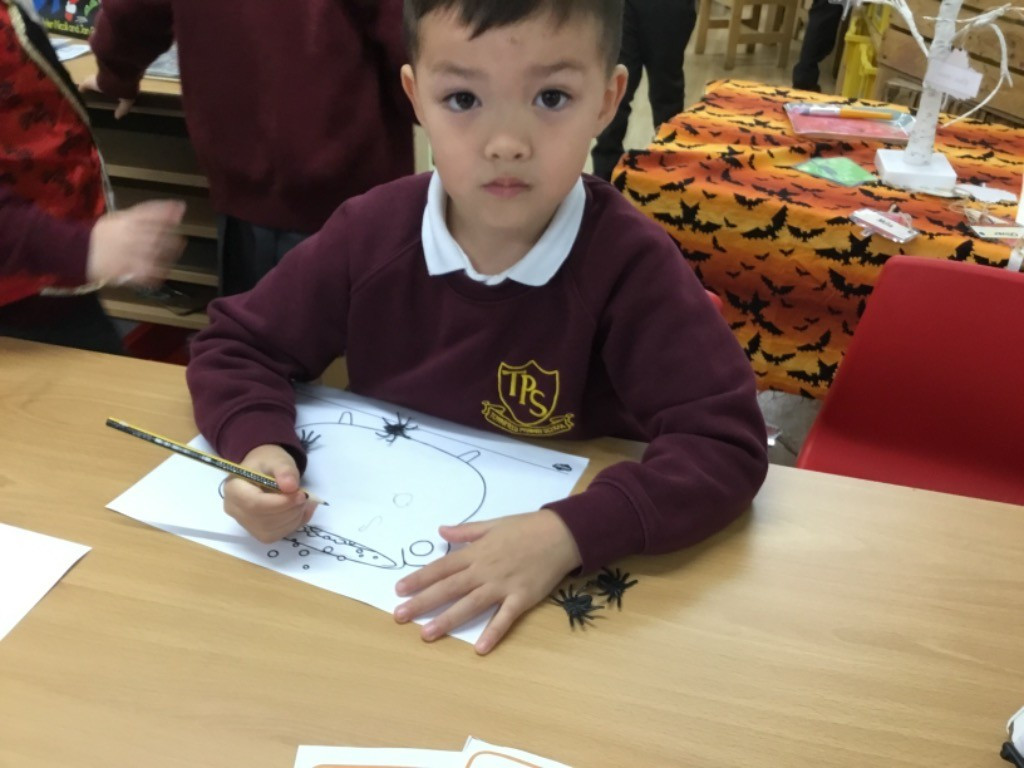 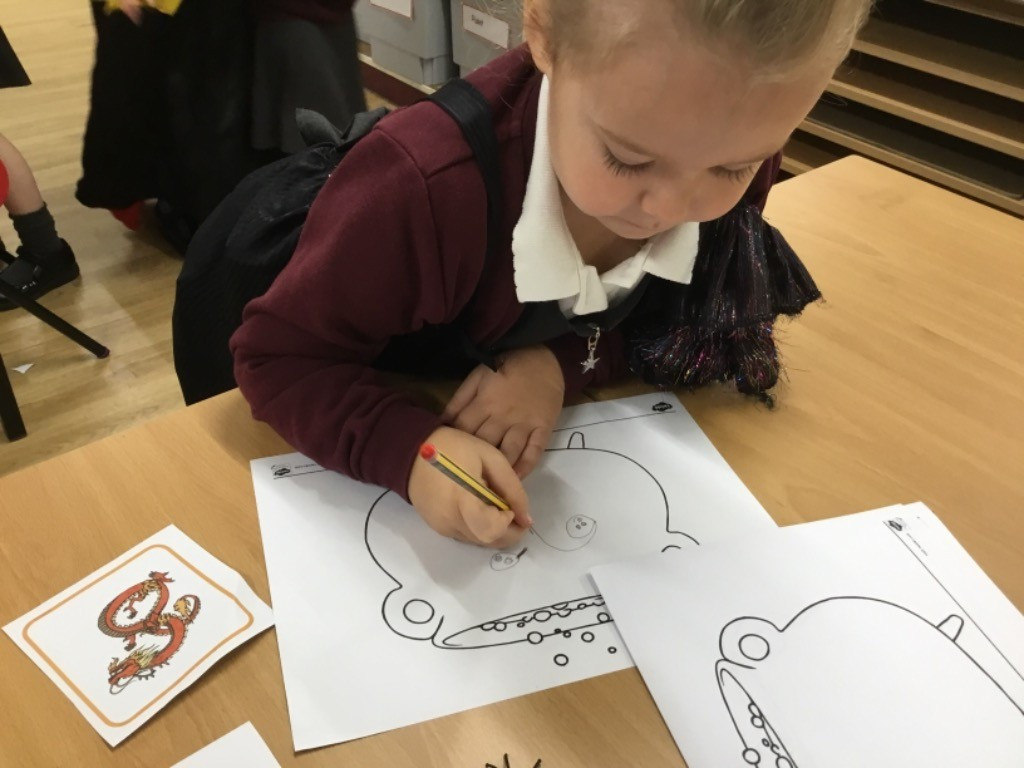 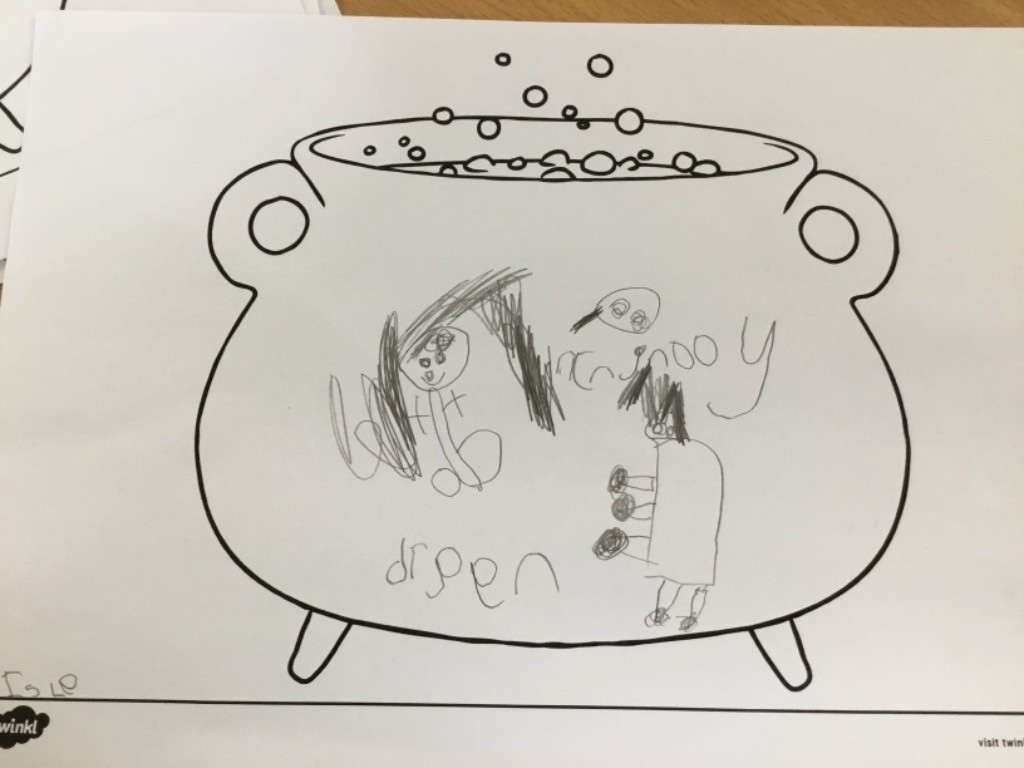 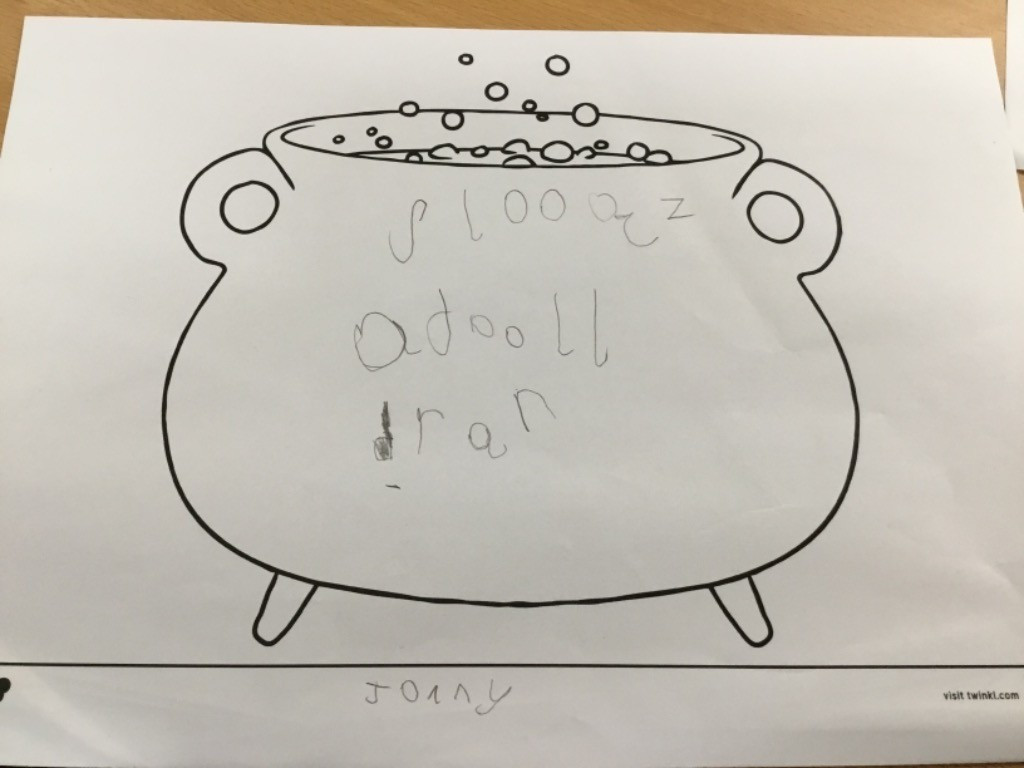 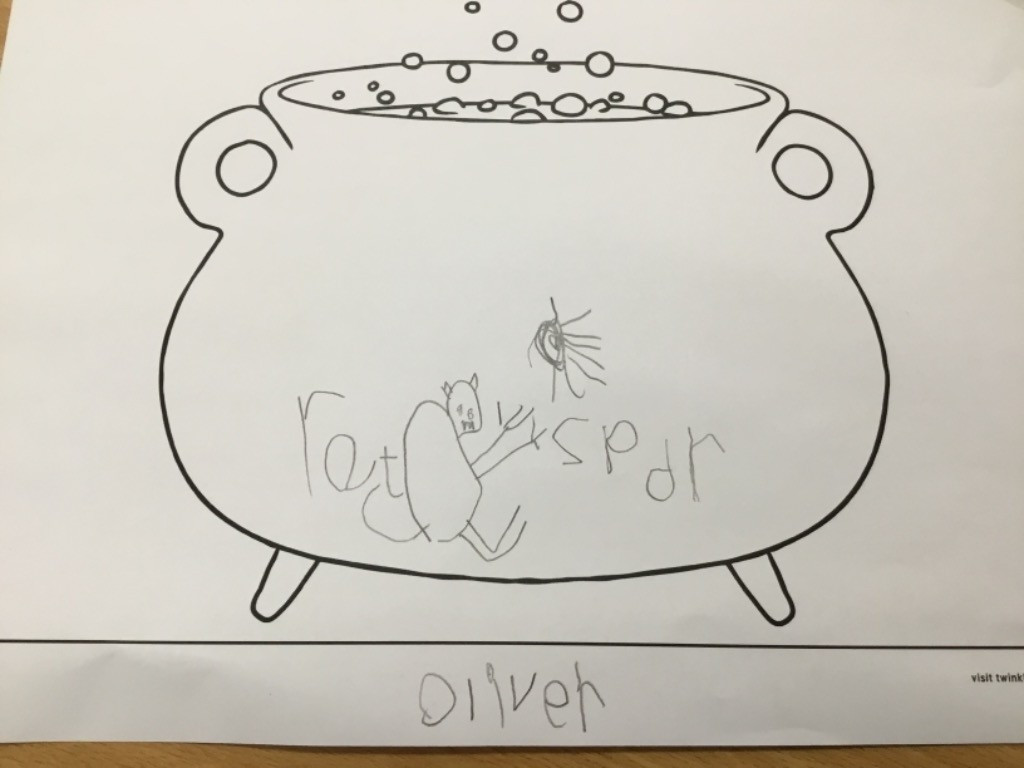 The Y1 children have been writing 'finding' stories and recount mesages.

Year 1 have been exploring a book called Major Glad, Major Dizzy. The story is about two old toy soldiers who are left under the floorboards of a very old house during the war. When the children who owned the toys had grown up and had children of their own, the children discovered the old toys and by accident.

Our children have really enjoyed exploring new vocabulary from the book and have been writing sentences to show their understanding of this. They have been learning all about nouns and adjectives and have incorporated this knowledge into creating their own 2A noun phrases and writing their own story. They have also been imagining how the characters are feeling throughout the story and creating freeze frames to depict key scenes from the book.

Year 2 have been very busy planning and writing their first draft for their circular narrative  'A River'.  They have had lots of fun applying the noun phrases, similies and repeated phrases we found on their own journeys. 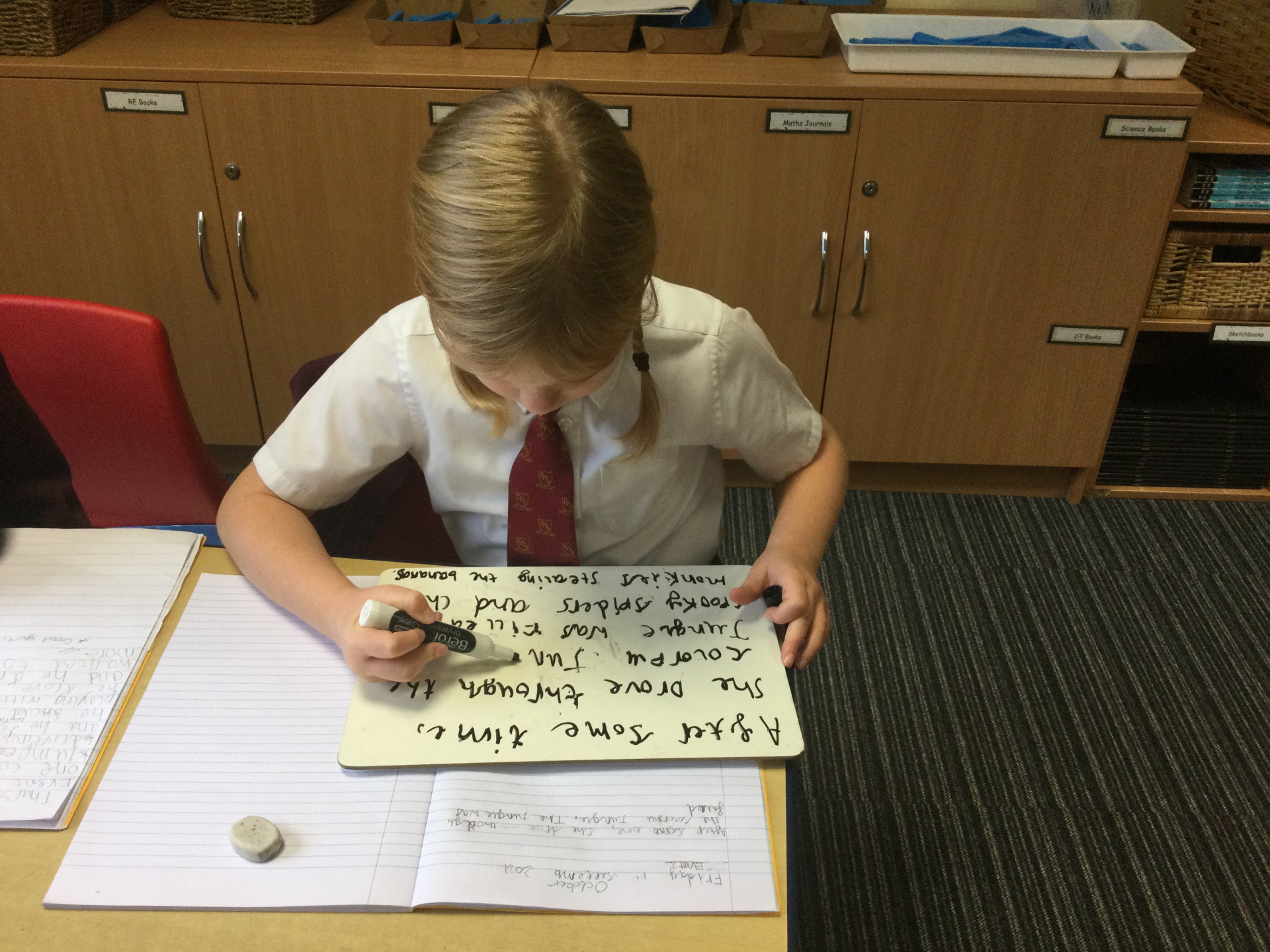 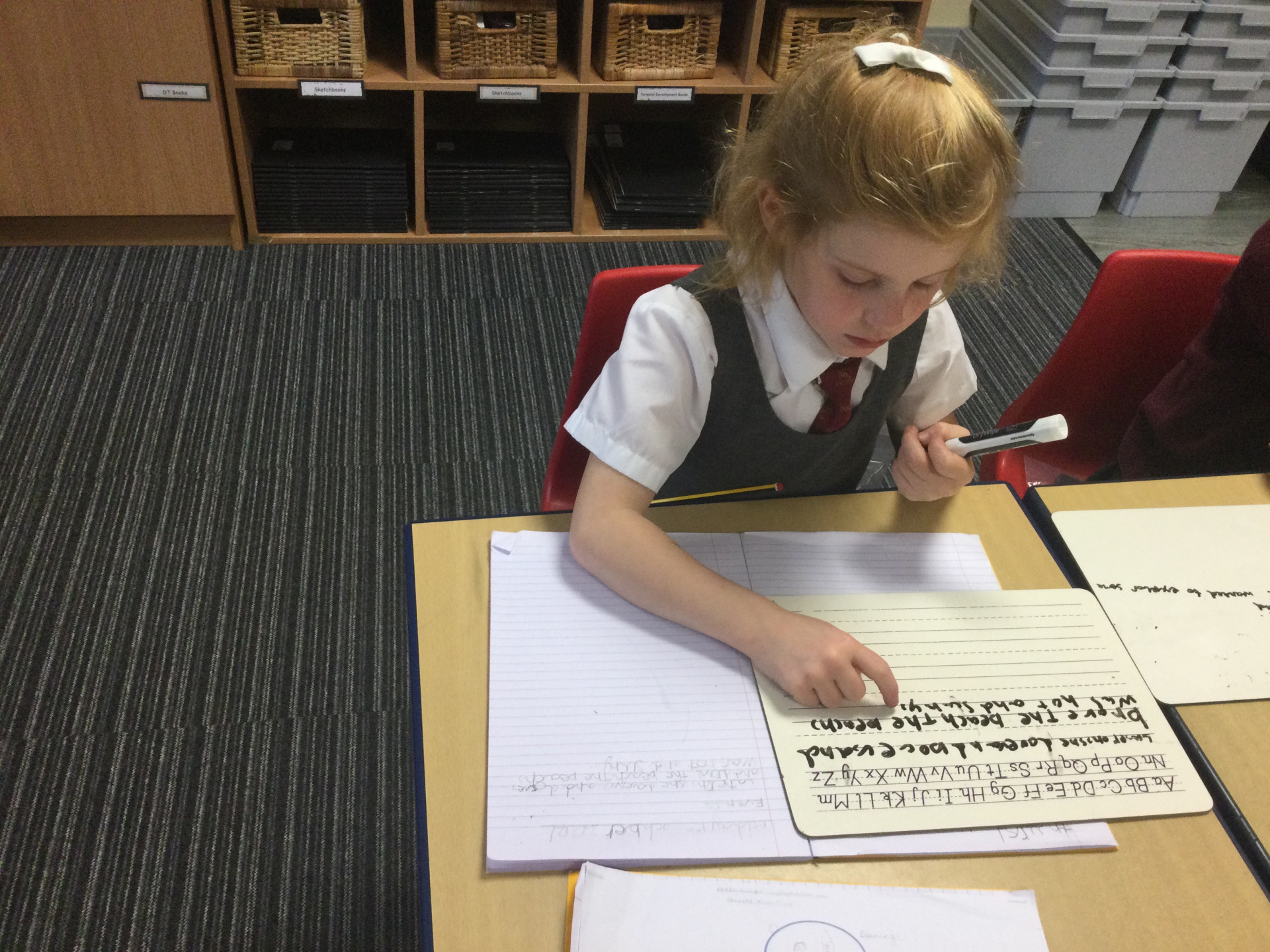 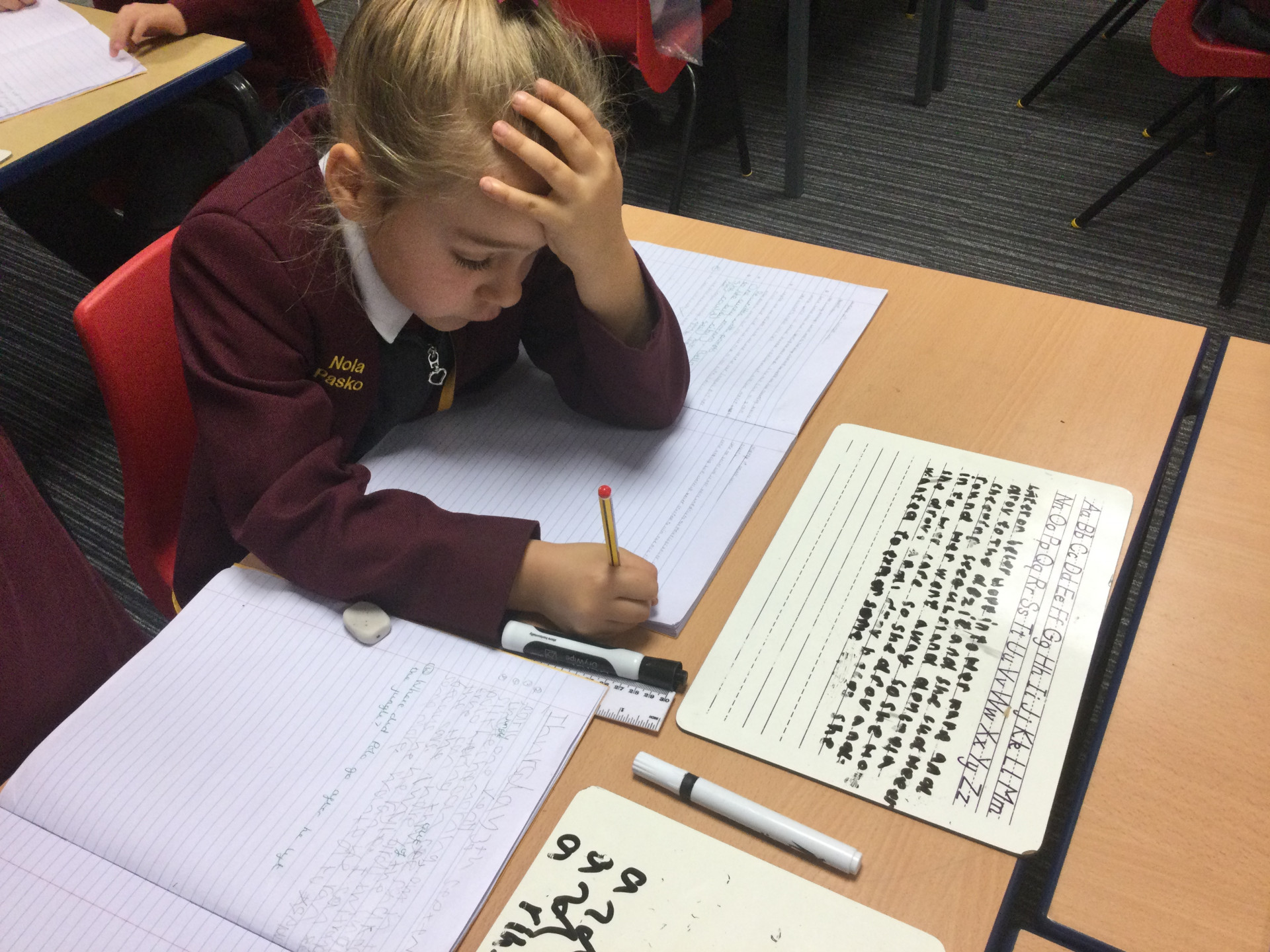 Year 3 have been working hard to publish their writing, they have been writing a Threat Narrative, which was based on the story of the Iron Man by Ted Hughes. The children were challenged to use noun phrases and similes. 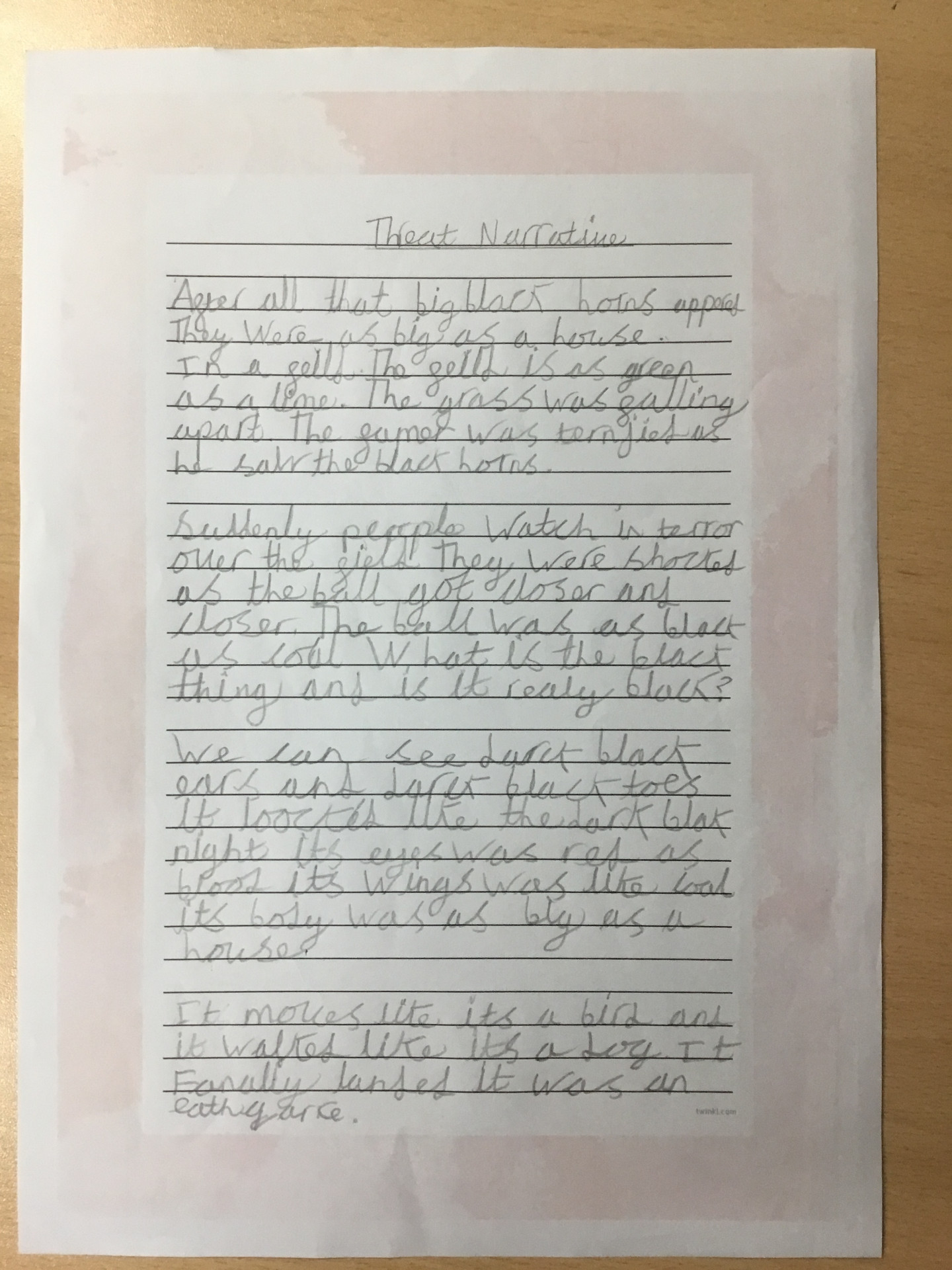 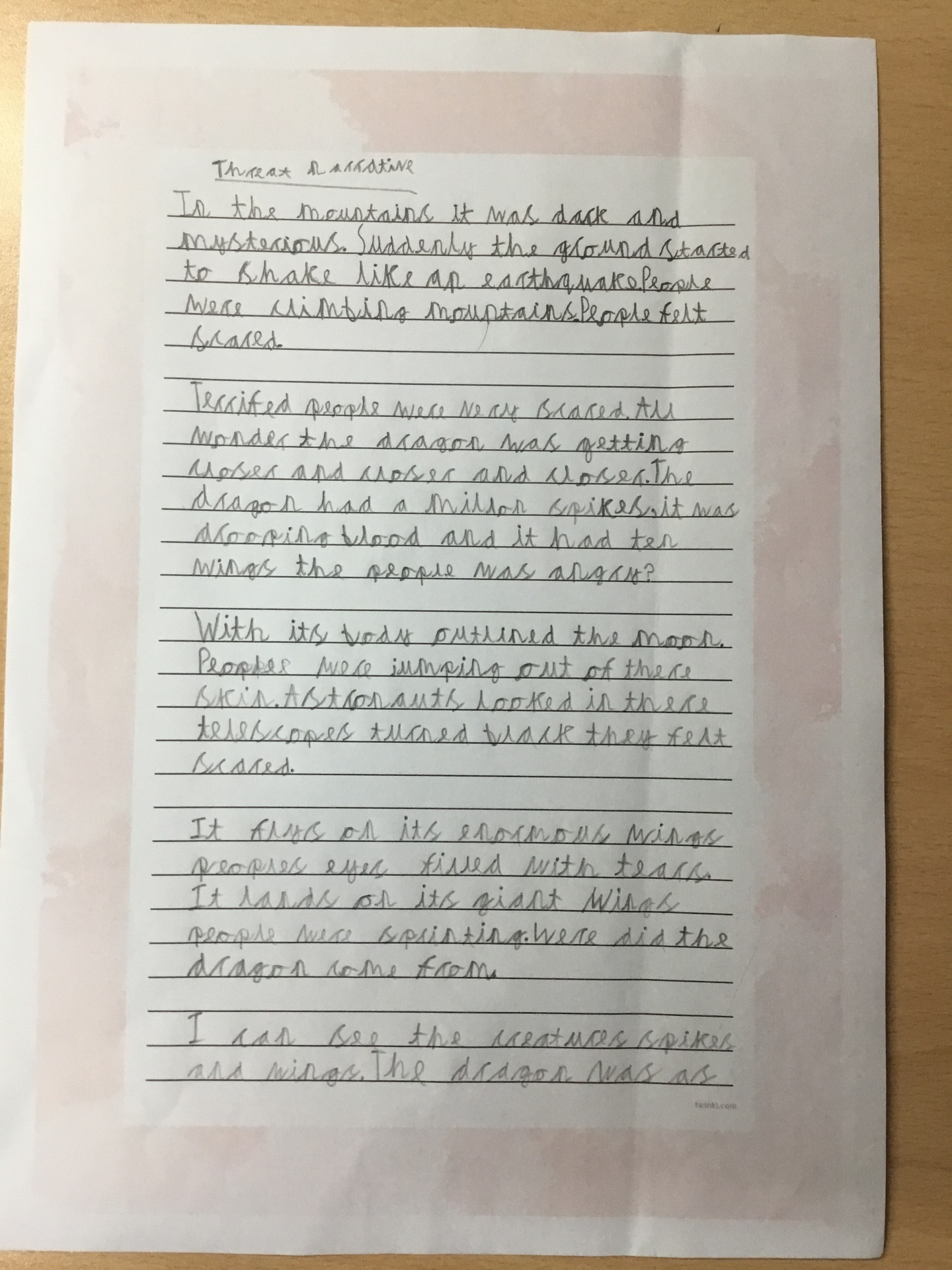 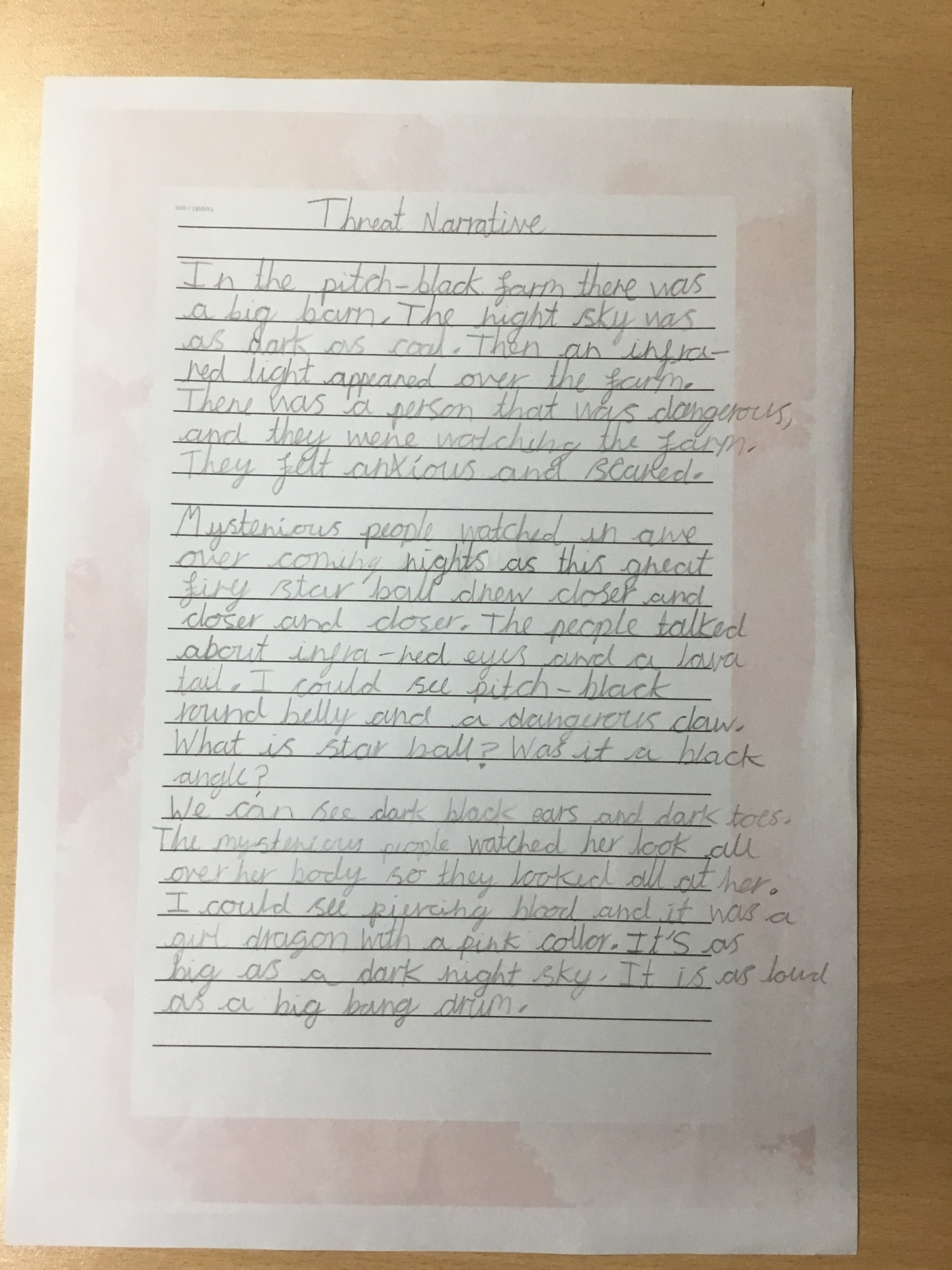 Year 4 have been writing Newspaper reports about a Whale attack! They have been editing and redrafting their work. 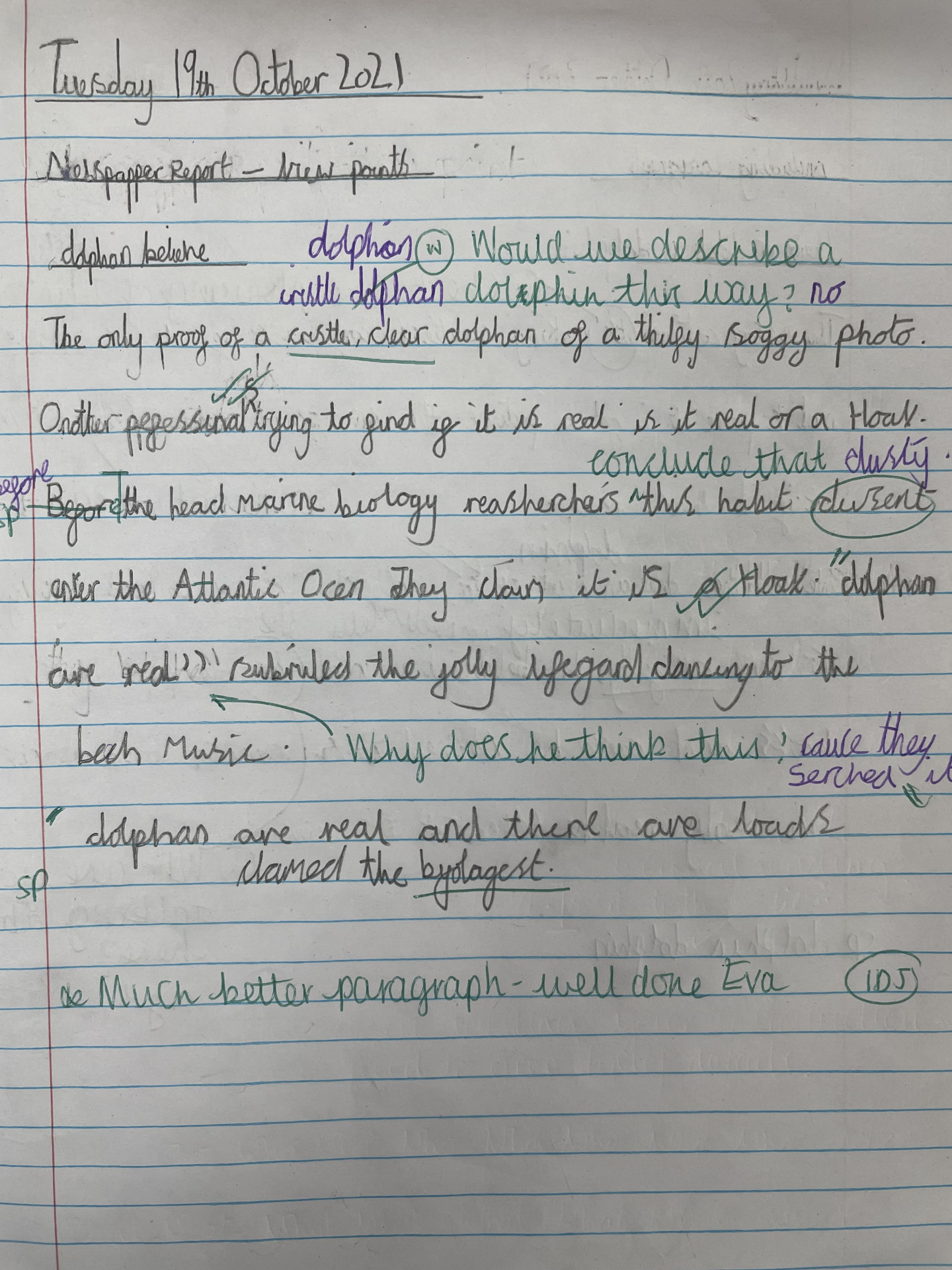 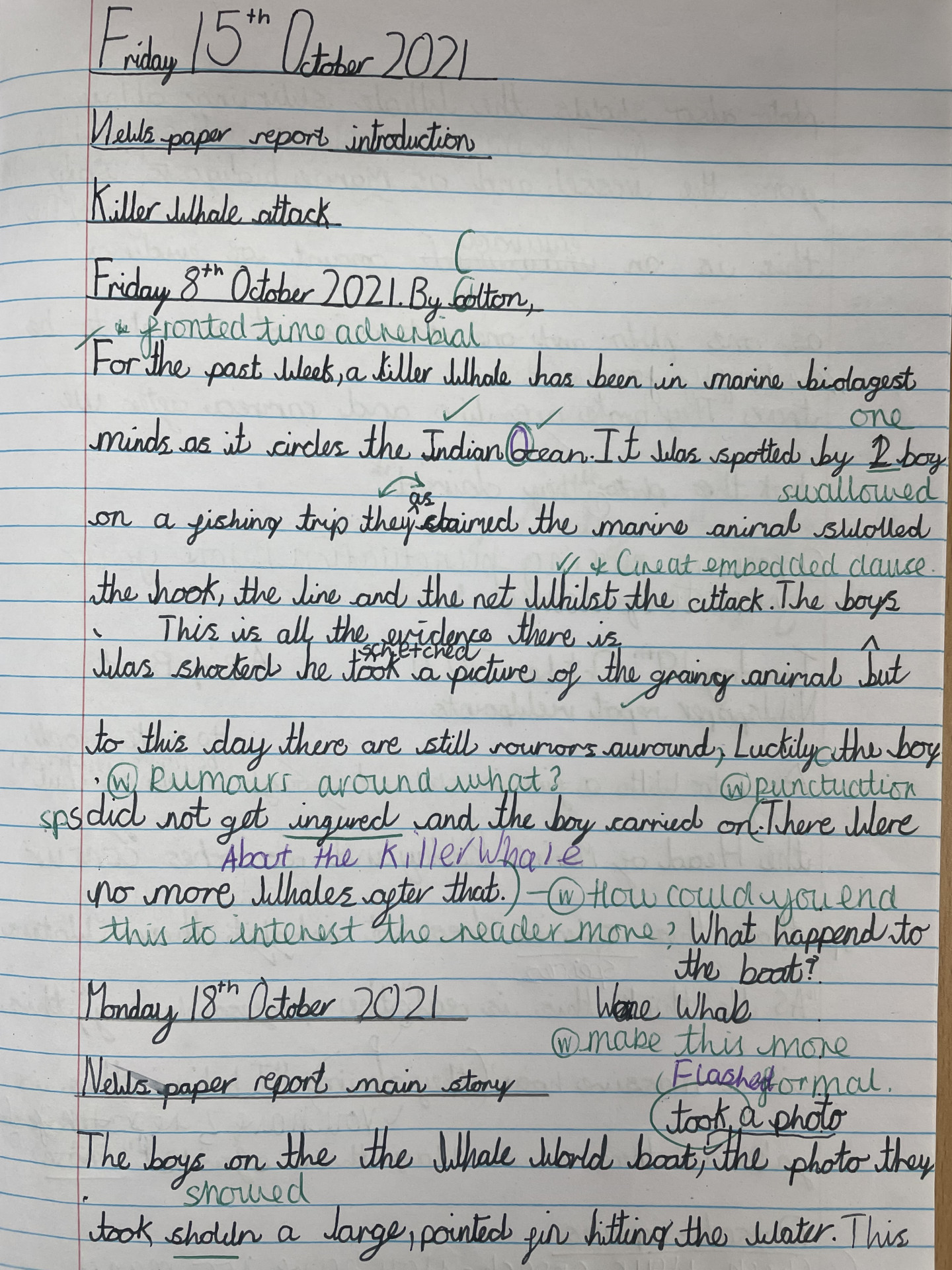 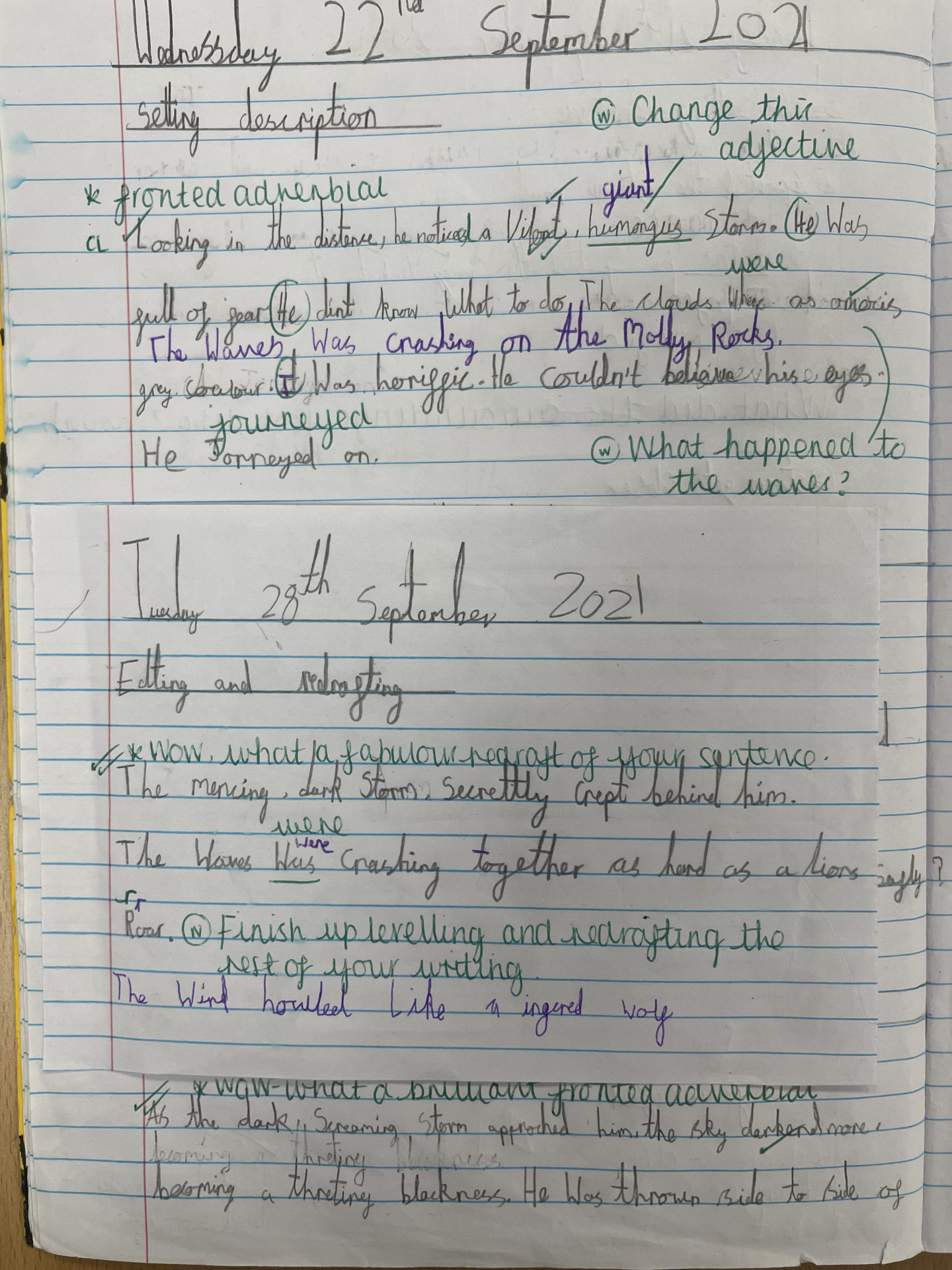 Year 5 -Where we once Stood

Year 5 have been using the vehicle text ‘Where Once We Stood’ to base their writing on this term. This is a non fiction text based around the 1969 moon landing, which they have used to base both a narrative exploration and a formal report. During the writing phase of their topic, the children have used a model text as a springboard to create a whole class shared write. Every day, the children added another paragraph to their work, responding to feedback as they wrote. 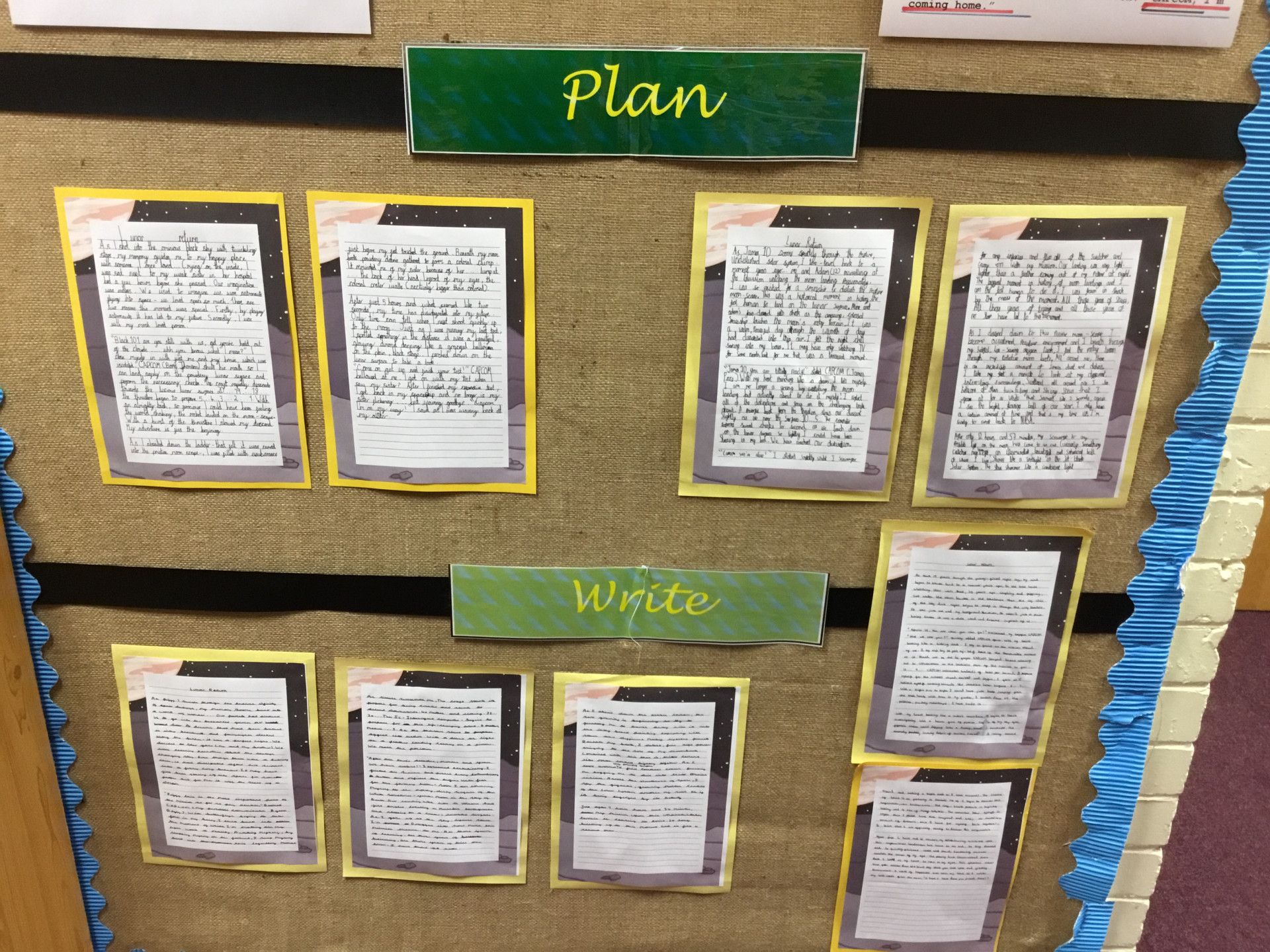 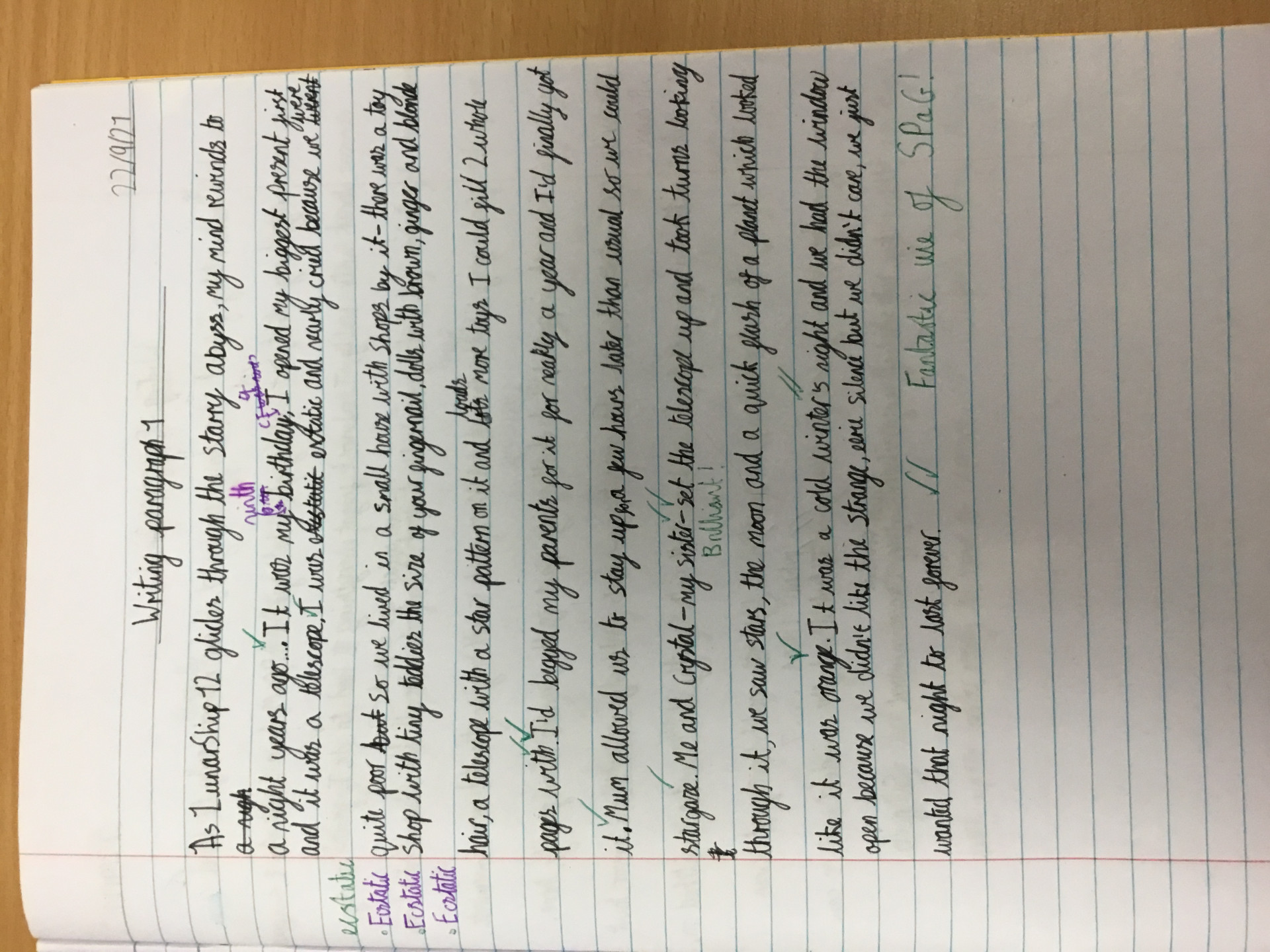 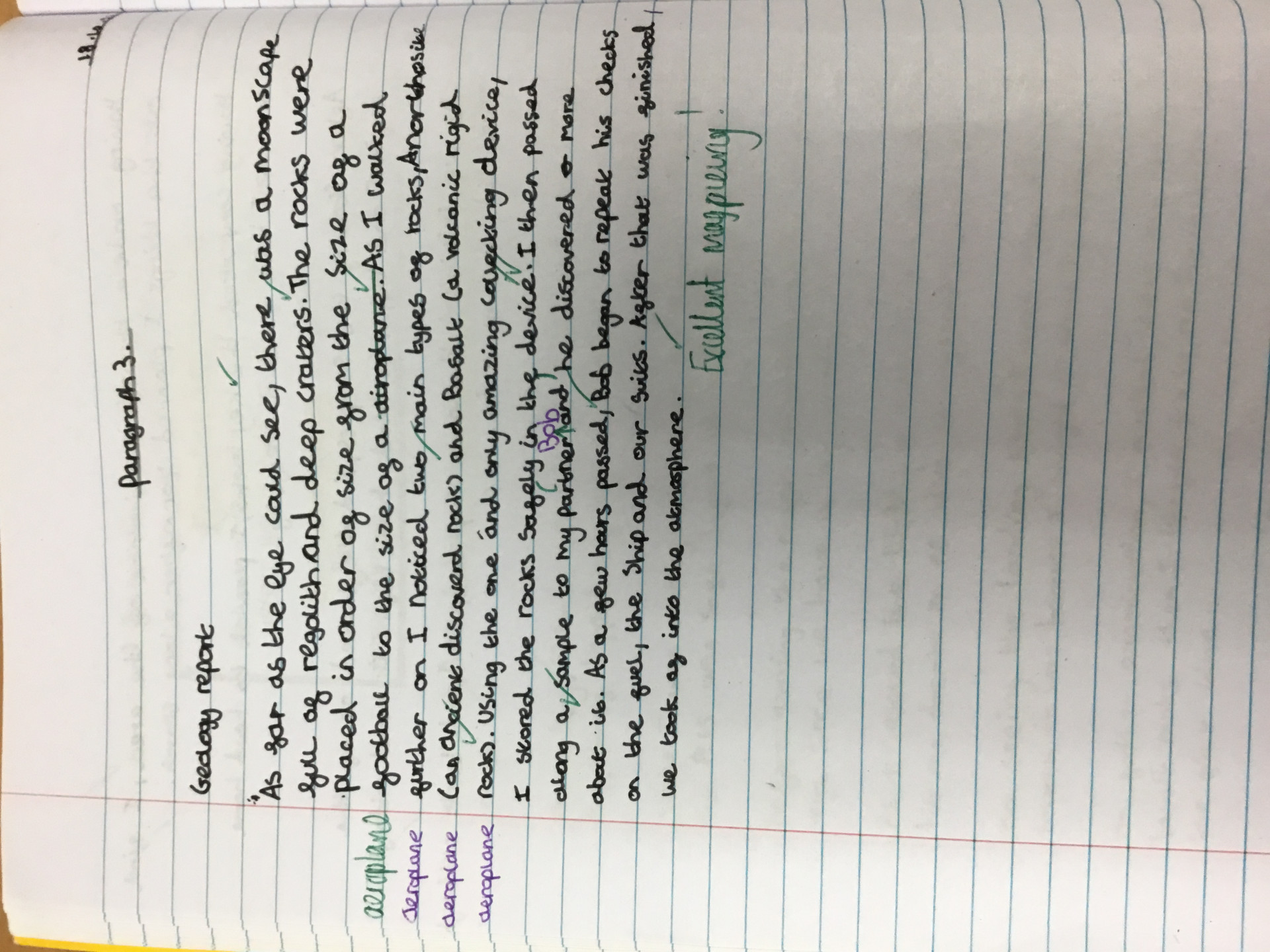 The Y6 pupils have been reading Rose Blanch. They have been writing diary entries from the point of view of Rose and how she risked her own life to feed the children.

Most of Spring Term was spent in lockdown. Despite this, we continued to deliver our English curriculum remotely through SeeSaw and face to face for those pupils attending school. Take a look at some of our writing outcomes.

Nursery pupils have been learning the first set of sounds and are beginning to apply their phonic knowledge in their reading and writing.

Year 1 pupils have been reading ‘Where the Wild Things Are’; a portal story by Maurice Sendak. They have been learning how to use conjunctions such as and, because, so and but to join clauses and are developing their use of punctuation.

have been very busily planning and writing our first draft for our circular narrative  'A River'.  We have had lots of fun applying the noun phrases, similies and repeated phrases we found to our own journeys.

Year 3 have been reading ‘Jemmy Button’ by Valerio Vidali. They have written return narratives and letters. Y3 pupils have learnt how to write in paragraphs, use prepositions to express time, place and cause and use inverted commas for direct speech.

Year 4 pupils have read ‘Leaf’  by Sandra Dieckmann . They have been analysing features of an information report to write their own about animals from the Arctic.

Y5 pupils have read ‘The Lost Book of Adventure’ by Teddy Keen. Following this, they have written a survival narrative and a survival guide. Pupils have learnt how to link ideas across paragraphs using adverbials, use semi colons to mark boundaries and commas for clarity.

After reading ‘The Ways of a Wolf’ and ‘The Wolves in the Walls’, the Y6 pupils have learnt how to write a balanced argument . In doing so, pupils have used a wider range of cohesive devices such as the use of conjunctions, adverbials, pronouns and synonyms Use of headings, sub-headings and bullets to structure texts.

Inspired by the different texts they have read, Nursery children have been beginning to blend and segment. They’ve enjoyed exploring non-fiction texts linked to minibeasts, acting out scenes from Handa’s Surprise and also The Enormous Turnip

As part of the 'Seaside' unit, Year 1 has been learning all about alliteration. They explored seaside scenes and videos in order to gain a deeper understanding of the creatures and the human and physical features of a seaside. They then worked with a partner to create some alliterative noun phrases.  Y1 explored their senses by listening to seaside sounds that helped create an alliteration word bank to refer to in their final written piece.  All of this background learning enabled us to create an alliteration seaside poem.

This term Y2 have a new book: 'A River'. The children have become authors and created their own story narrative. The book has beautiful illustrations that have helped with writing detailed descriptive sentences. Y2 have been doing some drama and role play to help  discover what it would be like to float down the river and see all of the amazing things!

Year 4 have been using a gorgeous book called ‘The Lost Happy Endings’ as a stimulus for their writing.  The pupils have written some beautifully twisted fairytales where the endings are not the original ones that we all know and love. They had to carefully consider the characters and how to convey their different personalities by describing their actions, how they speak, and what they are saying.  They have also written persuasive letters to the witch in the hope of appealing to her better nature and getting them back for Jub. The letters contained fabulous emotive language, imperative verbs, and fronted adverbials to organise their paragraphs.

Year 5 explored The Lost Book of Adventure, a book about survival and exploration. They then wrote their own survival narrative using cohesive devices to up-level their learning. They also created their own survival guide, after identifying and researching skills that they would need to survive in the wild.

During this term, Y6 have studied Shackleton's Journey. Using the text they have written their own Endurance narrative and Magazine Article. Pupils have focused on grammar: antonyms and synonyms; formal and informal language; the formal tone of speech, and the use of passive voice. Y6 have also studied features of the texts, including linking ideas across paragraphs using cohesive devices and the use of heading and subheadings to structure a text.