At Townfield Primary School we follow the National Curriculum and use the 2019 Wirral Agreed Syllabus for Religious Education and Worldviews Association programme of study to tailor it to the needs of our pupils.  This is enhanced by visits from people people of all faiths and trips to various religious establishments which adds an extra dimension to pupils’ learning about different faiths.

All pupils at Townfield Primary School study Religious Education including those who have SEN and/or disabilities and those who come from disadvantaged backgrounds.  The outcomes and expectations are the same for all pupils.

We recognise the importance of pupils learning about the diverse nature of worldviews and so from KS1 onwards, other principal religions are introduced (Hinduism, Sikhism, Buddhism, Islam, Judaism). In learning about other religions, pupils develop British values by showing mutual respect and tolerance for alternative beliefs. Our curriculum ensures that pupils acquire knowledge about religious beliefs, teachings, ways of life, practices and forms of expression and can build upon these skills and knowledge year on year.  Knowledge and skills are constantly revisited and updated to ensure that they become embedded. To aid understanding subject specific vocabulary is taught explicitly within every lesson.

Assessment criteria for RE at Townfield Primary School has been developed in line with the expectations laid out in the 2019 Wirral Agreed Syllabus.  This enables class teachers to assess the progress of the children as they move through the key stages. A variety of activities/methods are used to ensure that the planned curriculum has been taught and understood by our pupils.

At different points throughout a unit of work, teachers will use assessment activities such as verbal discussions, group presentation, role plays and/or mind maps. This formative assessment will help teachers to identify which elements of the unit of work are well developed and which may need further reinforcement. It also helps to inform future planning where further differentiation and support may be needed for pupils.

Pupils at Townfield Primary School come from a mixed urban area of Wirral. Our core values; resilience, respect and responsibility are continually developed through all religious learning experiences.

During Summer term 1, the children in Year 1 learnt all about how Christians believe that the world was made.  They discovered that the Bible talks about when God created the world and that this story is in the Old Testament.  Children were introduced to Adam and Eve's role in the Garden of Eden, how they disobeyed God and how he punished them.  Children also began to understand the importance of promises and why Christians believe we should be thankful to God for keeping his promises. 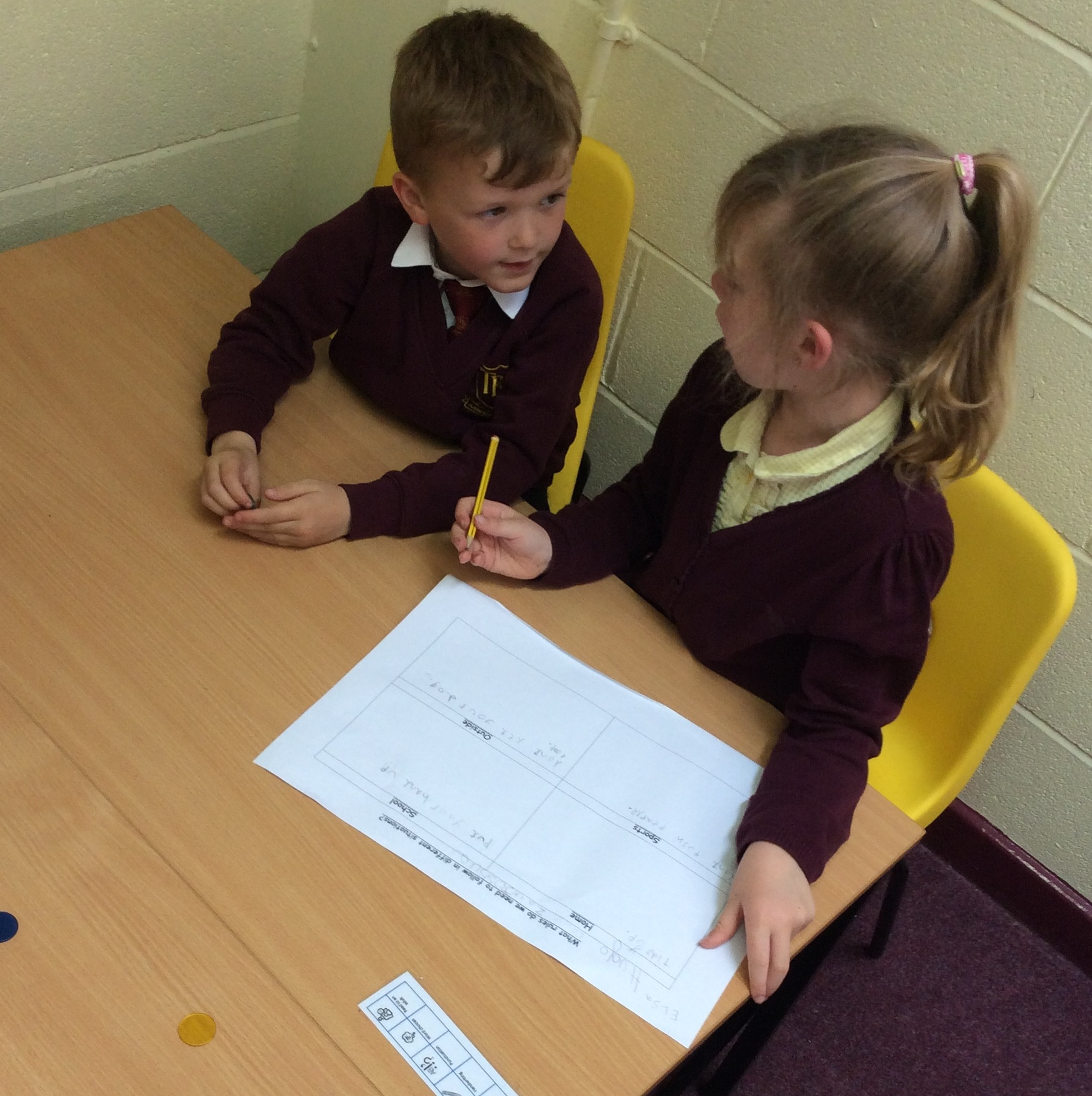 Year 2: Me, my Family and Friends

During this R.E. topic, the children in Year 2 began to understand that Christians believe that God created families to love and care for each other.  Children were given opportunities to discuss their own experiences of home, family and belonging and identify similarities and differences between how Christians and Hindus celebrate 'family'.  Children were also introduced to the Hindu festival of 'Raksha Bandhan' which celebrates family and, in particular, the love between siblings.  During Raksha Bandhan, Hindu girls make 'Rakhi' bracelets as a gift for their brother(s) to show how much they love them so the children in Year 2 made their own rakhi bracelets.

Year 3 children began to understand why Christians believe we should be responsible for the earth and its resources.  They also recapped on their prior knowledge of  the Creation Story and its meaning to Christians.  Children were introduced to the story of St Fransis of Assissi who was made a saint because he was a steward of God and cared for the world and all living things, seeing them as members of God’s family.  Children also researched and recognised what is right and wrong in relation to conservation issues nowadays and how we can improve on the way we care for the world.

In Year 4, Children are introduced to the religion of Buddhism and begin this topic by researching and learning about who Buddha was and the reasons why he searched for enlightenment then displaying their learning through role play.  They created posters about the 'Four noble Truths' of Buddhism and also learned all about the 'Eight Fold Path' and how Buddhists act daily to ensure that they live by the rules of the Eight Fold Path.

To begin this topic, the children were asked to bring in items that they consider to be precious (as distinct from valuable).  Each child was given the opportunity to outline why their item is precious and how they care for / look after it. Children were then encouraged to think about the people in their lives who are precious to them and why they consider them precious.  Towards the end of the week, children were introduced to the 'Beatitudes' and the meaning behind each of them.  They learnt that the Beatitudes were the things that Jesus thought were precious values to have and acted as a guide to help Christians know how to behave.

This term, Year 1 looked at Easter and learned that Easter is the Christian celebration of when Jesus died and rose again.  Children learned about some of the main events of Holy Week through role play and showing empathy with the people of that time.  They also looked at how exactly Christians celebrate Easter.

Year 2 began their Easter topic by looking at and understanding the importance of Lent to Christians.  They learned that Lent is a time to ‘turn over a new leaf’.  In contrast to Year 1, Year 2 called on their prior knowledge of the key events of Holy Week and used this knowledge to write about the days and understand the symbols Christians link with the days.

Year 3 began this topic by thinking about who was special to them and why they're special. Children then looked at how Jesus is special to Christians and how the disciples were special to Jesus.  After looking at and sequencing the events of Holy Week, children then followed instructions and made their own palm crosses.

The children in Year 4 took time to think about what ‘forgiveness’ really means and why it might be important, especially at Easter. They created freeze frames showing different scenarios and decided whether forgiveness should play a part or not. Children then studied the story of Peter the disciple and explained why they thought Peter denied knowing Jesus and why Jesus forgave him for his betrayal.

This term, Year 5 discussed the Big Question 'How is Christianity similar or different to other religions? Children researched how Christianity compares to the other main world religions.  Children also worked collaboratively to create their own powerpoint presentations about Jesus; who he is and why he is so special.

This term, Year 6 looked at Faith in Christianity.   They addressed the Big Questions ‘What is faith?, ‘Do I own my faith?’, ‘Can faith be influenced?’ and ‘What does ‘lead a good life’ mean to different people?’. During this topic, they studied the story of Corrie Ten Boom and how her faith kept her going through the worst times in her life.  Children also explored different people of faith and the impact that they have had on the world. They then worked collaboratively to create a biography for their chosen person of faith.

Year 2 learnt all about Hinduism and the Hindu 'festival of light', Diwali.  They looked at the 'Ramayana' (the story of Rama and Sita celebrated at Diwali) and also made their own symmetrical rangoli patterns.

Year 3 learnt about Sikhism.  The looked at the 5Ks of Sikhism and how they impact on the life of a Sikh person.  They also learnt the importance of the 10 Gurus, the Gurdwara and the Guru Granth Sahib.

Year 4 thought about journeys that are special to them and others.  They learnt the meaning of the word 'Pilgrimage' and looked at the similarities and differences between Hindu and Christian pilgrimage.

Islam was the RE topic for Year 5 this term. The learnt about the Prophet Muhammad, the importance of the Qur'an for Muslims and the way Muslims live their lives according to the Five Pillars of Islam.

Year 6 learnt about how the religion of Judaism first came into being, the role of Abraham and God in the creation of Judaism and the importance of the Torah to Jews .

RE Curriculum Overview.pdf RE Vocabulary Progression RE Policy RE Milestones